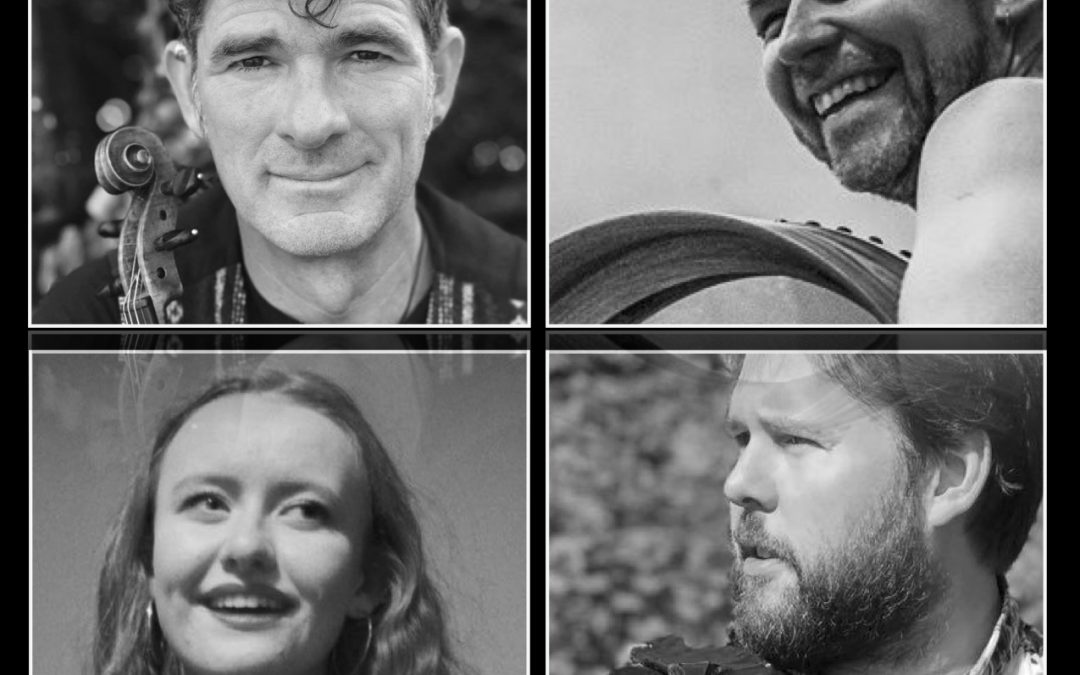 The Haar, Folk Radio UK‘s current Artists of the Month, is a brand new quartet, focused on breathing new life into traditional songs about love, poverty and oppression. Fiddler Adam Summerhayes and bodhrán player Cormac Byrne had already worked together recording their ‘pre-meditated’ Stone Soup album in Spring 2019. Later in the year, he connected, again as a duo, with accordionist Murray Grainger, as the currently very active The Ciderhouse Rebellion to create their totally improvised and spontaneous debut album, Untold. For The Haar, a word meaning a sea mist or fog from the North Sea, Adam, Cormac and Murray join forces as an instrumental power trio and add the vocal talents of Irish singer Molly Donnery. The Haar remain faithful the tradition begun by Stone Soup and continued by The Ciderhouse Rebellion – the music is created spontaneously in the moment. Glenn Kimpton of Folk Radio UK says “We need more music like this; spontaneous, alive and affecting, The Haar will take you on a journey and have you appreciating the purest of life’s pleasures. Wonderful stuff.” The band’s eponymous debut album ‘The Haar’ (reviewed here) will be released on 5 June. This song is not on the album. It has been recorded, filmed, mixed, and this video made, remotely, in lockdown. Appropriately, Anachie Gordon is a song about lovers separated. Jeannie is to be married off at the insistence of her father to a wealthy man, Lord Saltoun, but she is in love with Anachie Gordon. The song chronicles her resistance to the marriage before she is eventually dragged to the church. Jeannie refuses to sleep in the same bed until her father comes down and tells her maid to undo her gown. Jeannie collapses at her father’s feet and dies for love of Anachie. Anachie, having been away at sea, returns where Jeannie’s distressed maidens tell him that Jeannie has been married in his absence and has now died of a broken heart. Anachie tells the maidens to take him to the chamber where Jeannie lies and then, having kissed her cold lips, also dies of a broken heart. A bit like Romeo and Juliet, but without the lovers benefitting from the bedroom scene…