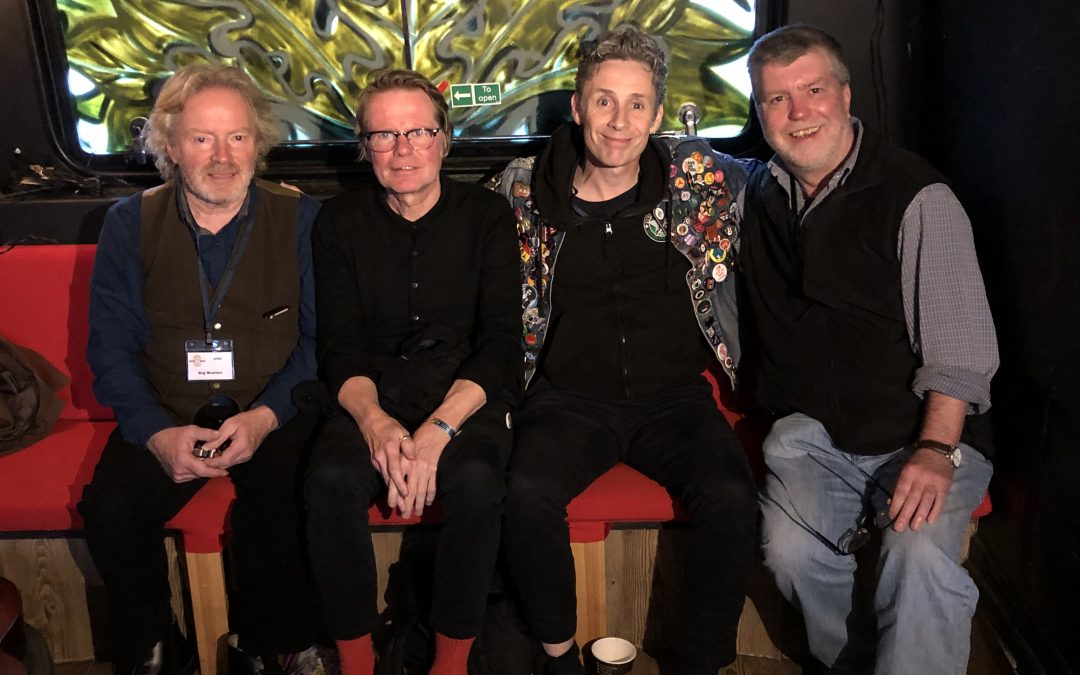 October 22nd 2019. Four men took their seats on the top deck of ‘Bob’s Blundabus’, with the crashing waves of the North Sea on one side and Whitby Pavilion on the other, and waited for the bus to fill. The wind was howling outside and everyone could feel the vehicle swaying, which added to the suspense as the audience made their way past Bob’s bar on the lower deck, up the stairs and settled into their places.

Once upstairs, their eyes were treated to a welcoming and colourful picture: side by side along the back seat of the bus sat Reg Meuross in his trademark waistcoat, Boff Whalley – head to toe in black apart from pillar-box red socks – and Joe Solo, bright eyed as always, his denim jacket covered in badges, each one carrying a message for a better world.

These three singer-songwriters were ready and waiting to be interviewed by writer and broadcaster Ian Clayton, who was a fan of all three and had seen them all perform at Musicport Festival over the weekend. The subject of the talk was ‘The place of the political songwriter in today’s climate’. Ian said: “let’s just talk and see what happens” in his wonderfully relaxed way that set the pace of this fascinating hour. He kicked off by asking these artists what inspires them to pick up their pens and write political songs.

“I don’t understand what songs are for, unless they are for speaking about the world and the human condition.” Joe Solo, the political songwriter, activist and broadcaster from Scarborough, was the first to answer, elaborating that for him songs hold a mirror up to the world. “That’s what Joe Strummer taught me.” he explained, “that songs should not be about trying to tell me something but should be getting me to look at things in new ways, and think for myself, and also that if artists don’t speak out, then who else is going to?” It was interesting to discover that Joe’s politics hadn’t come from his upbringing, but that it had been music which had inspired him, and The Clash in particular.

Similarly, Boff Whalley, former lead guitarist for the anarcho-punk and folk band Chumbawamba, now a playwright and the founder of Commoners Choir, didn’t grow up with his current political beliefs. Instead he describes his young self as an unapologetic and homophobic racist in Burnley. When Rock Against Racism started he wouldn’t even wear the badge, but just a few months after that he began to mix with very different people in the music world and changed his mind about everything. Music transformed Boff’s life and he described a feeling that he’s almost been wanting to pay a debt back to the world, from his former self, with his songs. “I hope my music makes a difference, even if it’s just starting conversations that wouldn’t have happened.”

Ian then turned to Reg Meuross, described by Mark Radcliffe as ‘a true troubadour and brilliant singer songwriter with a social conscience’ and suggested that while Joe’s protest and politics are very visible and palpable, perhaps Reg’s approach is a bit different, less overt, more observational… “That’s probably right” said Reg, “but similarly to Joe I see writing and performing songs as a way of getting people to think for themselves. This is our way of speaking out.” Reg originally started out in the music industry being signed by EMI and Arista, and was expected to write formulaic pop songs until he soon realised that wasn’t what he really wanted to do at all. “Hearing Bob Dylan’s ‘Positively Fourth Street’ for the first time was my ‘Road to Damascus’ moment.. The song was so personal, raw and powerful. I realised for the very first time that I could actually write about anything. I could write and sing about what feels important to me, what interests me and what pisses me off. Since then if I’ve seen an injustice and I feel there’s a song in it, then I will write about it. You’re right, I am not a soap boxer but I’m comfortable expressing myself through song.”

Before getting on the bus Reg had been mentally leafing through his political songs, had remembered how he’d come to write his song Victor Jara about the Chilean poet, singer-songwriter and political activist who was tortured and killed during the dictatorship of Pinochet. Reg remembers waking up one day, doing some writing, going off to a gig and on the way suddenly realising that what he did every day is exactly what Victor used to do.. “But Jara was killed for it, for speaking out like I do. So I wrote that song. A bit like Boff says, I felt there was a debt I wanted to pay for Victor. That guy gave his life for what we do and so it feels important to keep on doing it.”

Ian flagged up Reg’s song ‘Fools Gold’ as a great example of one of his political songs. At least three people in the room had very different interpretations of that same song, and this is what Meuross does so well; he tells a whole story in just three verses, with enough detail and emotion so you completely get it, yet leaving just enough space for the listener to think for themselves. That’s powerful songwriting.

So back to Boff and his hit ‘Tubthumping’. How did a protest song get to be a top of the chart hit? Did Chumbawumba set out with that intention? “No!” says Boff. “As a band we tried all kinds of different music just because we liked it and never because we were thinking about what would sell. This album was all about ordinary stuff: landlords and leaky roofs, queuing up at the dole office, going to the pub. We wanted to write a song about resilience, celebrating people doing extraordinary things in the face of poverty and austerity. We didn’t even have the chorus for ages. The song was rejected by a record company and so we released it ourselves and we had no idea it was going to be the success it was. It was a very special moment for me when I heard it played at a Burnley match!”

All three clearly agreed about the importance of protest songs, and that love songs are important too. “We need to hang onto the good stuff especially in these hard times.” said Boff, emphatically.

These three also share a passion for history. Amongst all the amazing gigging and activist work that Joe Solo does (on top of his day job as a washing machine engineer) he is also working on a project, Hull Pals Memorial, writing the human stories of soldiers (1914 of them) from Hull who died in WW1. “When it comes to war, you can’t see scale in the numbers, you can only see it when individual stories are told. When you look at the numbers of people that die in wars, you can’t see the destruction of families and workplaces, of football teams, of communities. These were real people, forced into fighting a capitalist war, who died alongside their mates.” Joe says he loves to tell the stories that fall between the pages of the history books, the human stories. He also touched on the power of music and how in WW2 the Germans were most scared of the Scottish regiments, because of the way they’d pipe their way onto the battlefield, and that gave them immense courage. ”I want people to leave my gigs feeling like that – undefeatable. Music makes you brave.”

Conversation then moved to Reg’s hugely successful recent Arts Council funded tour, the finale gig of which had been performed in in the Pavilion Theatre at Musicport Festival the previous night. ‘12 Silk Handkerchiefs’ is a Meuross song cycle about Hull’s Triple Trawler Disaster of 1968 in which 58 men lost their lives, and the subsequent campaign by fishwife Lillian Bilocca who led the ‘Headscarf Revolutionaries’ to get safety laws transformed on the trawlers. “This was an ordinary woman standing up for what she could see was wrong and making a difference”. There’s often a darker side of protest and ‘Big Lil’, although her action had saved hundreds of lives, was ostracized by her own community before she died, aged just 59. Reg has been touring the show throughout September and October along with Hull musicians Mick McGarry and Sam Martyn with narration from the author Brian W Lavery whose book The Headscarf Revolutionaries originally inspired the songs. The powerful songs and stories were rolled out in six acts, with a backdrop of archive footage from the time.

Continuing the theme of history, Ian turned to Boff to find out how on earth Chumbawumba had decided to change direction to became a folk act, producing an album of unaccompanied singing of English folk songs from 13 Century onwards. “In 1978 I got into the Watersons and the Wilson family and I was so struck by the purity and the contrast from all our equipment and amps. We decided to do something really different and explore the history of English protest… It was really enjoyable. History is so powerful. I didn’t get that from school,” said Boff. Chumbawumba then went on to make an album sampling old folk songs. Usually sampling can lead to tricky legal conversations sorting out percentages and royalties, but Boff found his own generous spirit reflected in the folk world. None of the writers wanted anything apart from their songs to be sung and shared. “The only bad thing you can do to a folk song is not sing it,” seemed to be the general consensus.

This led Ian naturally to ask about Boff’s choir, the Commoners Choir, who’d performed with Joe and in their own right at the festival. “Now more than ever people need to feel real together in real community – nor FB or twitter but in real life. A choir is a really good way of doing that. Real physical connection is really important.”

The session ended with Reg singing the many layered Fool’s Gold and a massive round of applause for all three of these writers, keeping the spirit of protest alive, and speaking out through their songs. This was a brilliant piece of programming by Musicport’s director, Jim McLaughlin, and I believe we all left that bus with heightened spirits. I agree with Joe – music makes us brave.