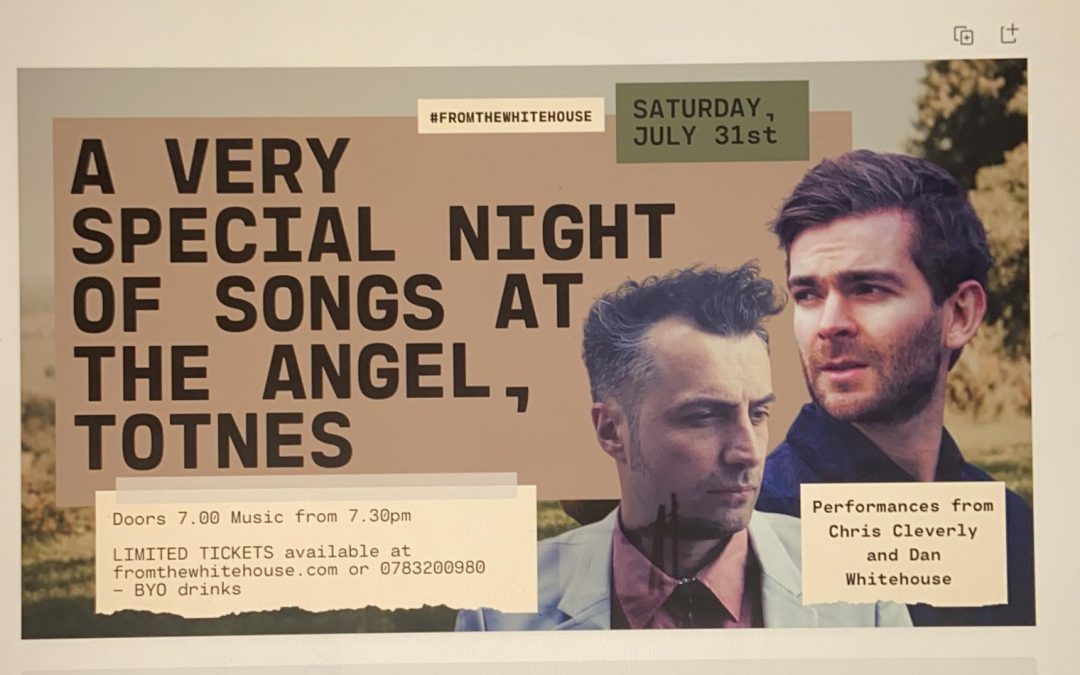 Join songwriters Chris Cleverley and Dan Whitehouse at The Angel Totnes for a rare co-headline appearance. Each artist will perform a solo set, followed by exclusive collaborations.

Chris Cleverley was born under a solstice moon, in an aura of honeysuckle mysticism. With a visceral lyrical style, inspired by the American greats Elliott Smith & Sufjan Stevens, his songwriting explores the place of folk music within the 21st Century emotional landscape. Shining an honest light on diverse, arresting themes from deteriorating anxious minds to damaging gender constructs, it is no wonder Folk Radio UK have called him “One of the most vital voices of his folk generation.” As a student of Nic Jones and Joni Mitchell records, his blistering yet delicate guitar technique is infused with the hazy, dreamlike essence of the 60s Folk Revival.

Dan Whitehouse is an acclaimed and award-winning English songwriter and composer signed with Reveal Records. Across five solo albums he has gained a reputation as “a fine songwriter, a unique vocal talent and a talented multi-instrumentalist/ performer” (MAVERICK) and has collaborated or toured with acts such as Joan as Policewoman, Kris Drever, Willy Mason, Gretchen Peters, Eddi Reader, and blues legend Peter Green. Dan’s double album Dreamland/Tomorrow was released on Reveal Records in 2020 and features collaborations with John Elliot (The Little Unsaid), Eric Lane (Joan as Police Woman), minimalist composer Richard J. Birkin, and BBC Jazz Award winning Saxophonist Xhosa Cole. The son of a Wolverhampton community radio pioneer, the coming together of community through music has always been important to Dan, and is something he draws upon both in his own work, and as a songwriting tutor, one-to-one mentor and workshop leader