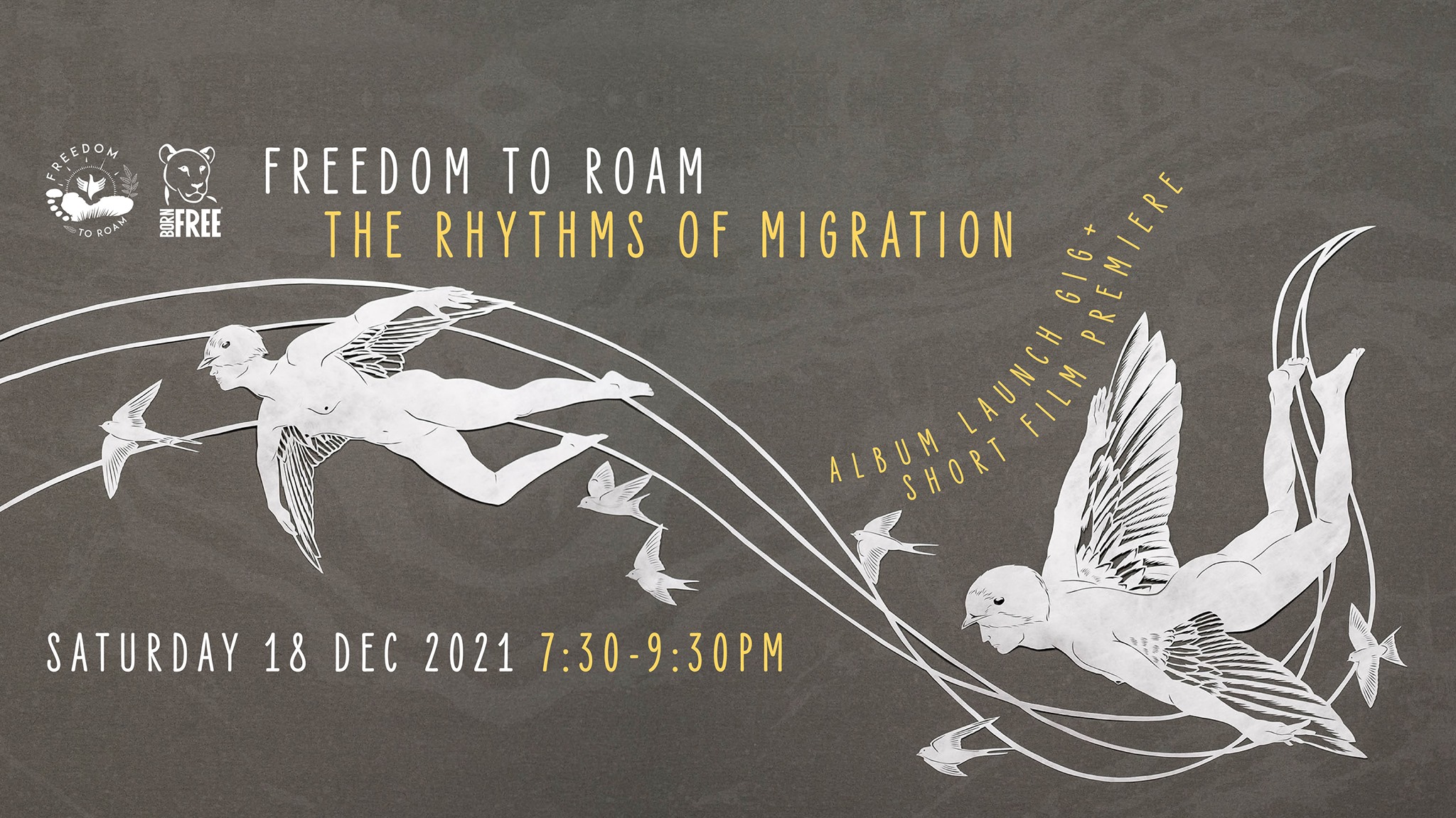 Freedom To Roam: The Rhythms of Migration Launch Gig + Documentary Premiere
Eliza Marshall’s Freedom To Roam project traverses themes such as climate change, migration, rewilding, empathy and human displacement. With a line-up of world-class musicians (including Catrin Finch, Kuljit Bhamra MBE and Jackie Shave), they will play their stunning new album in its entirety after an exclusive screening of the accompanying documentary.
“A swallow awakens in Africa, its journey northwards knows no borders.
A green shoot bursts from the ground towards the sky.
A child leaves their home, seeking safer shores.
The rhythms of migration should have no boundaries.
Freedom to roam is nature.
Our humanity, wildlife and biodiversity are undeniably interconnected.
This project searches for compassion, hope and a positive way forward
to cherish this, our beautiful planet Earth.”
So read the sleeve notes for The Rhythms of Migration album from Eliza Marshall’s Freedom To Roam – a humanitarian and environmental project first conceived of during a visit to the Outer Hebrides in 2018. Inspired by a desire for greater compassion and respect for nature, both stunning music and a powerful short film have been crafted as a movement through universal responses to our own and the planet’s most pressing needs.
The poignancy of Marshall’s vision found new focus during the pandemic and it was eventually written and recorded at Rockfield studios by a stunning line up including Catrin Finch, Jackie Shave, Dónal Rogers and Kuljit Bhamra, after a successful kickstarter campaign.
The resultant work of cinematic, world music fuses folk with classical via Africa, Scotland and India, crossing illusory borders, telling untold stories whilst simultaneously challenging us to see the world with new, and more hopeful, eyes.
Championed by Virginia Mckenna, the new album is part of a triptych that includes a documentary by multi-award-winning director Nicholas Jones (A Greenlander, You Are Here) and these multifaceted live performances.
“Freedom To Roam approaches the interconnected challenges of climate change, environmental destruction and human displacement within the context of our needs for freedom, empathy and hopefulness. It’s the starting point to an all-encompassing project that aims to change our understanding of nature, wildness and our pivotal role in the future of life on this planet.”
Eliza Marshall
“An important and thought-provoking journey with some of the world’s top musicians”
Virginia McKenna
“A heartwarming project, bringing together superb, cross-genre musicians to remind us of the beauty, and fragility, of our planet”
Sarah Kirkup (Deputy Editor, Gramophone)
“When Eliza approached me I immediately jumped at the chance as I thought it was something we all needed. Suddenly there was time to think, be inspired and to create. We could turn to nature, think about how to care more fully for the planet. I was inspired by the themes of openness and freedom at the heart of this project and to work with these wonderful musicians.”
Catrin Finch
“I’m very excited by this project and what it is asking us about freedom. What is freedom? What does it mean to be free? It’s an important question. The music that Eliza has put together will inspire people to look deeply at that question”.
Kuljit Bhamra MBE
This event traverses themes such as climate change, migration, rewilding, empathy and human displacement through film, music and projections. With a stunning line-up of world-class musicians alongside acclaimed video designer Amelia Kosminsky, Freedom To Roam will play their evocative new album in its entirety after an exclusive screening of the accompanying documentary by award-winning director Nicholas Jones.
Catrin Finch – Harp
Kuljit Bhamra – Tablas
Eliza Marshall – Flutes
Jackie Shave – Violin
Lydia Lowndes-Northcott – Viola
Robert Irvine – Cello
Dónal Rogers – Bass, guitars
Joby Burgess – Percussion
+ Google Calendar+ iCal Export