Epic version of Black Is The Colour from The Haar 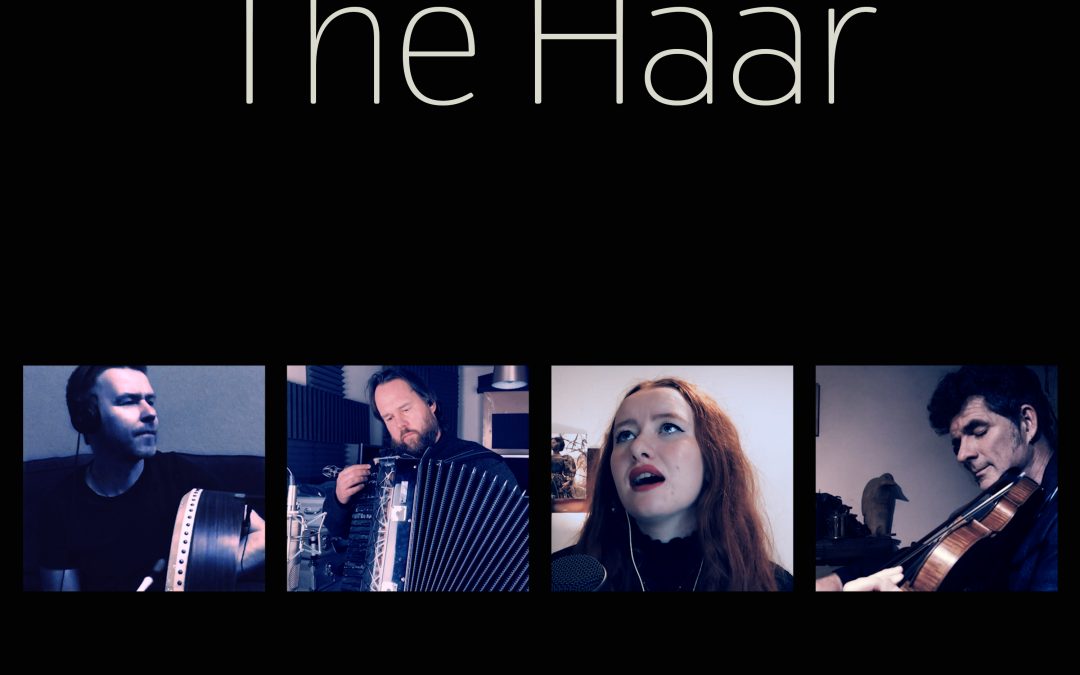 Since releasing their debut album ‘The Haar’ in 2020, a record that caused Folk Radio UK to proclaim “we need more music like this; spontaneous, alive and affecting”, Anglo-Irish folk group The Haar have found themselves, like many of us, separated by land and by sea.

This is particularly frustrating as the group rely upon intense interaction in order to produce their improvised music, in a process they describe as ‘live reactive composition’.

Thankfully, through the wonders of modern technology, the band are still able to record remotely, and  return with an epic take on the traditional song Black is the Colour.

The Haar’s version of this much beloved song is as unique as you would expect. From Murray Grainger’s yearning and evocative opening, through the sparse verse with Molly Donnery’s gorgeous vocals and the throbbing questioning rhythms of Cormac Byrne’s bodhrán, it leads inexorably to the almost symphonic instrumental rhapsody leading from Adam Summerhayes’s improvised transformation of the melody.

The final verse brings even more poignancy, with new words by Adam hauntingly and devastatingly sung by Molly. As the music fades, the solo fiddle brings the track to its heartbreaking conclusion.

The band has its origins in a chance meeting at Craiceann Bodhrán Festival and introduces the fresh talent of traditional Irish singer Molly Donnery combined with three of the most exciting instrumentalists on the folk and traditional music circuit: Cormac Byrne (Instrumentalist of the Year 2019, FATEA Magazine Music Awards), Adam Summerhayes (‘a Paganini of the traditional violin’ fROOTS) and Murray Grainger (‘Gorgeous stuff’ BBC Radio 3).

Their debut album ‘The Haar’, a collection of traditional Irish songs tackling love, poverty and oppression, was heralded as “an impressive debut that’s reaping deserved acclaim” by FATEA and “an absolutely amazing album” by legendary folk radio presenter Mike Harding.

“Very rarely does an album appear unheralded and threaten to make a major impact. The Haar is one of those rarities.” folking.com

Live performances have, of course, been off the cards since the release, but with bookings for Beardy Folk Festival, and Costa Del Folk Portugal, The Haar will be bringing their unique and exceptional music to live music lovers in 2021.

Until then, enjoy the band’s version of Black is the Colour; purchase a download from HERE   and pick up a copy of their debut album ‘The Haar’ from HERE.