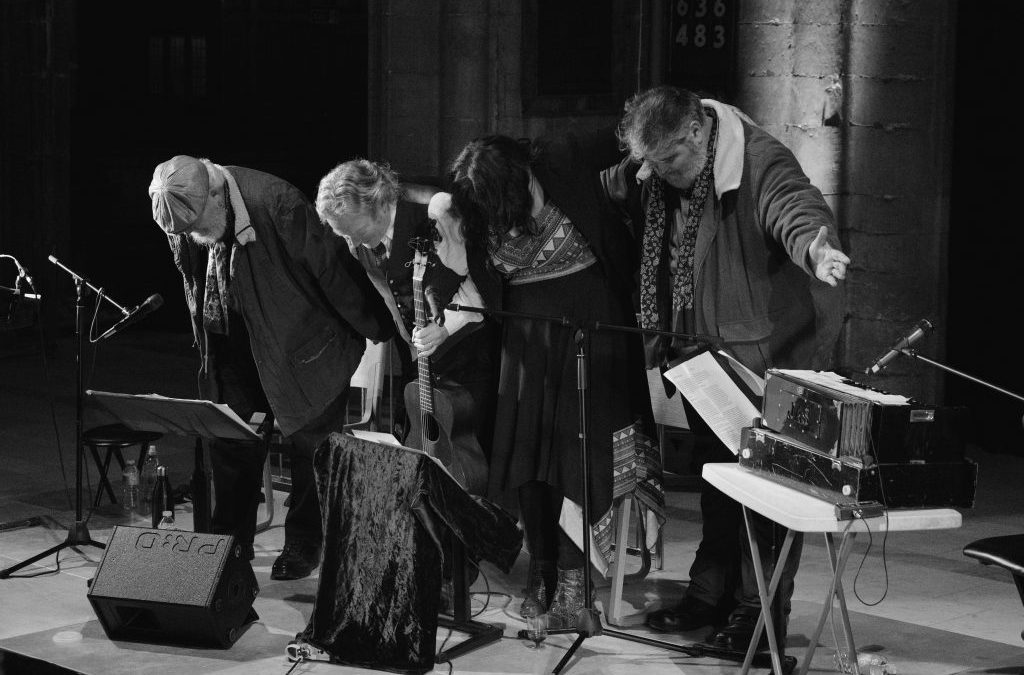 On Friday the 8th of March, internationally renowned radical singer-songwriter Reg Meuross brings ’12 Silk Handkerchiefs’ back to Hull Minster, presenting the city with another chance to experience his moving song cycle about the ’68 Triple Trawler Disaster, fighting fishwife Lillian Bilocca, and her Headscarf Revolutionaries.
12 Silk Handkerchiefs
Written and performed by Reg Meuross. Joining Reg on stage: Sam Martyn and Mick McGarry
Narration by Brian W Lavery
Friday 8th March 2019 Doors 7pm, show from 7.30pm
Hull Minster, South Church Side, Hull, HU1 1RU
Tickets £8 advance, £10 on the door from Hull Box Office, or the church or wegottickets.com 01482 221113
Returning after a sold-out preview performance in November 2018, the show takes place not only on International Women’s Day (a fitting tribute to the Headscarf Revolutionaries), but also on the 51st anniversary of the memorial held in the Minster for those lost in the disaster.
Reg is joined on stage by Hull musicians Sam Martyn and Mick McGarry, with narration by Brain W Lavery threaded throughout Reg’s beautiful songs. This juxtaposition of song and story creates a unique experience that is a tribute not only for the 58 fishermen who perished in 1968, but also to the 6,000 other souls who have sailed from Hull never to return.
After three trawlers sank in the space of three weeks, Lillian, along with Mary Denness, Yvonne Blenkinsop and Christine Jensen MBE (formerly Smallbone) fought to improve working conditions on the trawlers. The campaign eventually took them to Westminster and led to significant changes to safety laws which subsequently saved thousands of lives at sea. Despite this success, Lillian Bilocca was ostracised by her community and overlooked by history, ending her days in obscurity. The show’s title comes from Lil’s last action in 1988 as she lay dying, which was to send her daughter Virginia to buy a dozen handkerchiefs to give as gifts to those who had cared for her in hospital.
Inspired by Brian W. Lavery’s book ‘The Headscarf Revolutionaries’, this multi-media show, featuring rarely-seen archive footage and photos, promises to be an moving and emotional event that celebrates and commemorates the important work and sacrifice of the men and women of Hull’s fishing community.
Many from that community were in attendance in November last year – hundreds from Hessle Road’s fishing community sat alongside the last surviving Headscarf Revolutionary Yvonne Blenkinsop, relatives of the other Revolutionaries and of those lost in the tragedy. Overwhelmed by the power of the show, and with many in tears, they were led in a standing ovation by Former Deputy Prime Minister Lord John Prescott (who campaigned alongside Mrs Bilocca as a young trade unionist).
Video: https://youtu.be/NyJNApyRqgo
What people are saying about 12 Silk Handkerchiefs:
“Moving and hardhitting” MAVERICK
“An essential listen for anyone who cares about music and communities” PENNYBLACK MUSIC
“A fitting tribute…to the power of individuals to bring about change for the better.” FOLK RADIO UK
“Rich in honest emotion, deep humanity, resonant lyrics and infectious melodies“ FOLKING.COM